No Buster Posey? No Kris Bryant? No Kevin Gausman? So far it's been no problem for the Giants as they've cruised to a 7-2 start and head to New York for their second road series of the season.

It's still very early, so it's hard to make any real judgments on the long term potential of this team just yet but as of now, it looks like they haven't missed a beat from that 107 win season a year ago. In fact, I would say there are aspects of this team that are an improvement over last years bunch.

First off, of course we have to commend the unit that has propelled this impressive start and that is the starting rotation. Anthony DeSclafini is the only one who's yet to make it out of the fifth inning for his two starts but he looked much better in his second outing on Saturday after getting hit pretty hard by the Marlins at Oracle last week.

Logan Webb and Carlos Rodon have really set the tone atop this rotation though. Webb has gone 14 innings over his two starts, allowing just 2 runs with 10 k's and a 0.71 WHIP. Pretty much standard for 25 year-old ace ever since he elevated in that final start of the regular season last year and carried it into a dominant postseason. 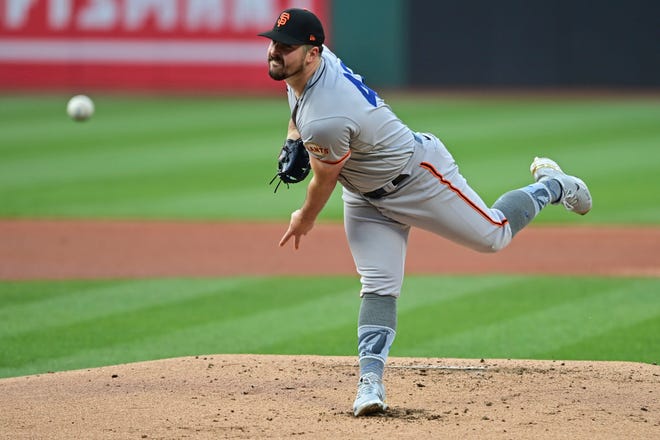 I said on twitter the other day that Rodon has made Giants' fans forget a little bit about the guy he's replacing by going 12 innings, allowing just 2 runs with a major league leading 21 strikeouts. He's looked about as dominant as anyone in baseball through the first couple weeks and he brings an energy to the mound with him that I think fires up his teammates.

Of course Alex Wood's impressive couple of starts don't stick out as much as Webb and Rodon but we cannot overlook them as he's also allowed just two runs in two outings with over a strikeout per inning. He's another guy who's picked right up where he left off in 2021.

Alex Cobb generated a lot of buzz with the stuff he had in his first start. If he goes at New York with anything close to what he had vs. San Diego his first time out then the Giants will have a great chance at winning their 6th game in a row.

The starting rotation has been better than I think anyone was anticipating, and the expectations were pretty high for this bunch coming in. They have dual aces at the top and 3 guys who all look like legit number three's behind them. Again, it's still very early but this Giants rotation is lining up to be one of the best, if not the best in all of baseball. That Guardians' team they just went in and silenced were swinging it pretty well before the Giants came to town.

The offense, has also come alive as they've been a different bunch since that big outburst in game two vs, San Diego. Joc Pederson is hitting over .300 with power. Brandon Belt is picking right up where he left off last season before going down with the broken hand. Joey Bart is still battling the strikeouts, which will improve with experience, but he's had some of the most impressive exit velocities of the young season. Thairo Estrada has become Mr, Clutch.

People were worried about if the Giants would score enough runs, and that still could become an issue at some points in the season, but right now things are going very well and there are a bunch of areas where they're still going to get better. Brandon Crawford, Mike Yastrzemski and Darrin Ruf haven't even really gotten going yet. Plus we can't forget that they're still without a few bats who will only improve the depth of this team when they come back.

The bullpen has also been a bit overshadowed by the rotation to start the year but they too look like the strong unit that carried them throughout the summer last year.

Now they'll get.a huge test as they head to New York for four games vs. the Mets, who themselves are off to a nice start. This should give us an idea on where this team really stands here early on. They'll face the best arms the Met's have, sans the injured Jacob DeGrom. It's going to be similar to the way they started out the year vs. those strong young arms on the Marlins and they managed to take two of three there.

You know this teams clicking when they're taking advantage of their opponents mistakes and the extra opportunities while being led by their pitching. That's what they're doing right now and that's a formula that enables them to beat teams with maybe a deeper lineup than them.

Anonymous said…
Love what these guys are doing. Keep Thairo at 2nd and bring la Stella off the bench. Let Wade back in for Duggar this teams gonna take off even more. I like Wilmer’s bat over Longoria but Longo’s glove is sorely missed… In Farhan We Trust!!
3:58 PM

Popular posts from this blog

June 08, 2015
Well, as the Giants pick at 18 in the MLB's annual June Amateur Draft approached, one huge name stayed available that I was hoping would end up falling to the Giants, but alas, Brady Aiken was taken one selection before the Giants pick at 18. Instead, the Giants went with another young arm, and one that many had going in the top-15 in Southern Nevada's right-hander, Phil Bickford. SF takes RHP Phil Bickford 18th I don't know a whole lot about Bickford other than what I've read and watched in recent draft coverage and player previews. Bickford has bounced between the pen and rotation in his early baseball life, but the Giants' will most likely develop him as a starter and go from there. He's not as polished as Tyler Beede (the Giants top pick a year ago), but appears to have explosive stuff and a solid frame at 6'5" and 210 pounds. He's already been a top-10 pick, by the Blue Jays in 2013, but chose not to sign and instead attend CSU Fullerton.
96 comments
Read more

January 26, 2012
Well, even though I touched on it a little bit in our last post, I haven't really had a chance to get my thoughts out on the new Lincecum deal since he and the Giants agreed earlier in the week. Also, on the other end of things, the Giants missed out on shoring up their outfield by letting Cody Ross sign in Boston for only $3 million in 2012. First off, obviously, wanted to talk a bit about Lincecum. I've already said here that I didn't expect him to sign a long-term deal that takes him through free agency, but it doesn't mean he wants to leave San Francisco like everyone is suspecting. I mean, if I were Lincecum, I'd probably do the same thing, even if I planned on eventually signing with the Giants long-term. Why take a chance at mitigating your value to just sign a deal? Granted, a 5 year, $100 million deal isn't anything to sneeze at, in this market, if he were a free agent, Lincecum could probably easily command a 8 year, $200 million deal. If he could get
346 comments
Read more

May 31, 2013
The Giants have been one of the worst teams in baseball away from AT&T Park this season at 9-15, but they're going to have to turn things around on this one, starting with the NL-leading Cardinals in St. Louis. The Giants record is slipping, and so is there spot in the NL West standings, and the big reason why has been their miserable play away from San Francisco. It wasn't more evident than it was on the teams recent painful roadie through Canada and Denver, but they couldn't even get themselves right in at least one of their mini two-game set with the A's over at the O.co. One big reason for the drastic home/road splits is, of course, the struggling starting pitching. Matt Cain's ERA (5.46), Madison Bumgarner's (3.55), Tim Lincecum's (5.86) and especially Barry Zito's (10.19) are all significantly higher  when they pitch away from the thick, foggy atmosphere on the San Francisco Bay. On the positive side of this, these guys' track records sug
12 comments
Read more